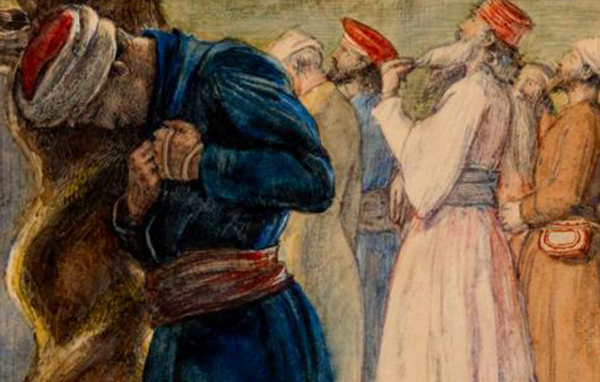 You may have read in one of my recent letters in the CtK Herald that I have just started the third year of my 3-year contract at CtK. During the next months, it will be determined whether I should remain as your priest and become your rector rather than the priest-in-charge. I am thankful for the salary and benefits that are provided to me and my family which is only possible through your giving. Sometimes I feel guilty because my salary is literally the biggest line item of our budget. But I need you to know something. I am NOT here because of the salary or benefits. I have never decided on a job based on the income, sometimes to my own detriment. Rather, I have tried to follow to call and guidance of God because I belong to God and I am convinced that wherever God leads, God will provide.  I accepted the call to CtK because  I knew without a doubt that I am called to serve here with you at CtK. (I preface my sermon with this disclaimer because I am going to talk about money again today. I am not talking about money to make sure my salary or CtK’s budget is secure.)

For weeks I have been talking the Divine Economy- the call to merciful, sacrificial, and loving generosity.

Why? Because our health and wellbeing as a church and as individual followers of Christ is closely connected with our understanding of and ability to live in the Divine Economy.

As if to encourage me to keep on speaking about the Divine Economy, Jesus Ben Sira, the named author of this book of Sirach, written between 180 and 175 BC, admonishes his people (in the verses preceding our reading for today) to “honor the Lord generously and not skimp on the early produce presented.” He goes on to say, “Every time you give, have a cheerful face, and dedicate your tithe gladly.” And then in the first verse of our reading for today, we hear, “Give to the Most High as he has given to you, and as generously as you can afford.”

According to the CEB Bible commentary, Ben Sira also talks a lot about sacrifices as the method provided for by God for humans to repair and build up their relationships with God. He sees right actions, including moral conduct, returning a kindness, giving aid to those in need, turning a neighbor from sin, and keeping the commandments as equivalents of God-pleasing sacrifices and offerings. It is an interesting thought that generous giving could be an avenue of repairing and building up our relationship with God.

In Paul’s letter to Timothy, we see Paul at the end of his life, in prison and expecting to die, speaking about the offering of his life. He says that he is being poured out as a libation – as a blood offering. He models what it means to live in the Divine Economy – to give generously of one’s life even to the point of death. In our Gospel reading from Luke, Jesus makes it clear that the act of giving a tithe in and of itself does not mean anything if the motivation of giving is to exalt oneself and show that we are better than others. Both readings make it clear that giving that is pleasing to God stems from a heart attitude of surrender that says, “I belong to God and everything that I am and have comes from God.”

In the time Sirach was written, many upper-class Jews had decided they needed to adapt themselves to the Greek and Greek influenced culture of the kingdoms that surrounded them so that they could be a part of the international systems of power and profit. This sounds so much like what we have done and continue to do today. We have been lulled into shaping our lives according to a monetary system that is built on security that comes from hoarding, power, and profit even if it goes against the ways of God’s kingdom.  Ben Sira was trying to teach his people that true blessing in life comes only by fearing God and living in line with the covenant God made with God’s people.

For Jesus ben Sira, right living in God is about more than money, for sure, but it is also about money. Money and “stuff” is so often where the rubber meets the road in our hearts and our lives. The way we handle our money and our resources is an indication of whether our lives belong to ourselves (or others) or to God. This is why I believe it is important to take the issue of the tithe serious. Using the tithe, giving 10% of our income and resources, as a guideline for minimum giving is an invitation to generosity and blessing, as well as a mechanism that protects us from self-deception.

In the Episcopal Church, we have a tradition of making a pledge. Every year, we commit in writing, to give a set amount of our money to the church. Some people give the whole amount at once, others give it weekly or monthly. Our total collective pledge should cover the full operating budget of CtK. If everyone who considers themselves a member of CtK would pledge using the tithe as a guideline, we would have more than enough to cover our budget, build our youth programs, expand our outreach to those in need, keep our buildings and grounds in tip top shape, even with looming energy costs and a shaky economy. Why do I believe this? Because this is how God’s economy works. Among us, we have everything we need to accomplish all God has called us to be and do.

If we don’t have everything we need, it could mean one of two things:

And here is the bonus: If the promises of the Bible are not convincing enough, studies have shown that people who give to others and especially to causes that they believe in experience greater happiness. A 2008 Harvard study titled “Spending Money on Others Promotes Happiness” showed that spending money on others brought about much greater happiness than spending money on oneself. Another 2011 study titled “It’s the Receipt that Counts” showed that giving to others makes people feel good and giving to people and causes close to the participants brings even greater happiness. A 2008 Arthur C. Brooks study found that monetary giving like tithing actually influences income. He found that giving and income have a circular relationship – the more we give, the more we prosper and the more we prosper, the more we give.

There is a very interesting verse towards the end of our reading. “God will not show partiality to the poor.” This stood out to me because throughout the Gospels, Jesus shows preferential care for the poor. In this context, it means that the poor are not let off the hook when it comes to the blessing of living in the Divine Economy – the call to merciful, sacrificial, and loving generosity.

For your own sake may I kindly, humbly, and gently ask you to ask God to show you where you can align yourself with merciful, sacrificial and loving generosity. And as a part of that, prayerfully consider what you should and can pledge to CtK for 2023.