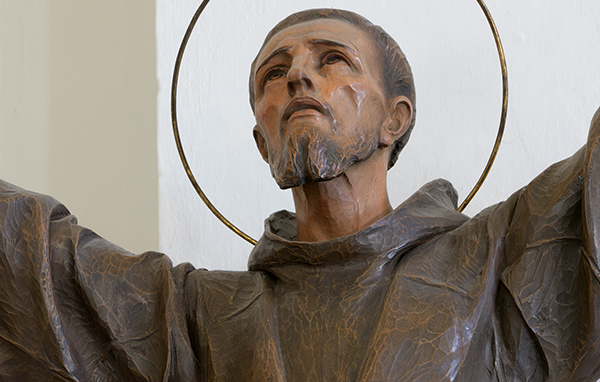 This coming Tuesday we celebrate the feast of St. Francis of Assisi who was born sometime around 1182 and died at the age of 44 in 1208.  What makes it more special to be remembering St. Francis this year is that I finally got to visit Assisi and celebrate the Eucharist with the Anglican community there this summer.

You were invited to bring your pets to church for a blessing. Many people think of St. Francis as the patron saint of pets, animals and creation and he is. But he wasn’t just a nice guy who loved animals and wore sandals. His love for creation was undergirded by something very powerful. He was a hardcore follower of Jesus. But he wasn’t always like that.

He was born into a well to do family (his father was a fabric merchant) and he lived a cultured life, read and wrote Latin, was knowledgeable in French language and literature. He was a recognized leader of the young people in his town and was known to have a love for life. When he became a young adult, he participated as a soldier in various wars. He was on his way to fight in the papal forces when he had a VISION or DREAM, an encounter of some kind with the Lord. In this vision, God spoke to him to return home and wait for a new kind of knighthood. He heeded the called, returned home and began listening intently for God’s direction. He was only 23 years old.

After this initial vision, he has a few other experiences. He saw a vision of Christ, he mingled with beggars and begged himself, and he gave to lepers and actually kissed the hand of someone with Hansen’s disease, something that was repugnant to him. One of the visions he had was when he was standing before the cross in the chapel of San Damiano outside of Assisi. He heard God speak to him and say, “Go, Francis, and repair my house which, as you see, is well-nigh in ruins.” He responded immediately, went home and got some fine cloth from his father’s shop and his horse and sold them in order to repair the church. The priest at San Damiano refused the help which caused Francis to throw the money out the window. His father was so upset with what he did that he brought Francis before the civil authorities and called the Bishop of Assisi. Francis was not having any of this. Right then and there, he took all his clothes off, stripped naked, handed his clothes to his father and said, “Until now I have called you my father on earth. But henceforth I can truly say: Our Father who are in heaven.”  The Bishop gave Francis his cloak to cover his nakedness and off he walked. He renounced worldly goods and family ties to embrace a life of poverty and service.

Shortly thereafter he attended a service on the Feast of St. Matthew and heard the Gospel account of the mission of Christ in which Jesus tells his friends to go out and preach and say, “The Kingdom is at hand! Take no gold, nor silver, nor money in your belts, no bag for your journey, nor two tunics, nor sandals, nor a staff…” This spoke to Francis so deeply that he said, “This is what I am seeking. This is what I want to do from the bottom of my heart.” He removed his shoes and threw away his walking stick, and put on a rough tunic and began to preach repentance. He was only 26 years old.

At 27, Francis wrote down his rule of life for those young people who began to follow him. All of this led to the founding of Franciscan order of the Friars Minor, the women’s Order of St. Clare, and the Lay Third Order.  Francis was only 28 when he founded the Order of Friars Minor.

The order began to grow and became a significant force for the spreading of the Gospel. Francis was absolutely committed to both personal and corporate poverty. He was interested not just in physical poverty but the total denial of self. It was in this spirit that he revered creation as the mirror of God and called all creatures and nature his brothers and sisters.

I have often been challenged by the life of St. Francis from the time I was a young adult in my 20s.

The life of St. Francis has often challenged me when I was in my twenties. I remember I can’t remember if I read about it or heard about his life, but I remember being really hit deeply by it, and I was living in Hawaii, and my family home with my mom and dad were very strong Catholics. My mom and I shared that last week that she was very frugal, and taught us how to save money. We all had savings accounts, and I had three savings accounts there wasn’t that much in it but for me that was good. And I remember, after reading about St. Francis,

I said to my mom, close my accounts, I’m giving my money away, and she was like what said, Yeah. So I did. I closed my bank accounts, looking back. It was not that big of a deal, but for me in that moment. It was a big deal, and the other thing was, I just thought I have to give my clothes away, So I kept maybe two jeans and a couple of t-shirts, and I gave all my clothes away.

It sounds kind of silly looking back, but for me, it was priming the pump of my life of learning how to respond to the nudge of God and the Holy Spirit. It went further. Some of you know that I was an exchange student. When I was seventeen I came to Germany, and it was on that trip to Germany that I had an encounter with the Lord, and when I got here I was placed with a family where the mother and the brother, my age were devout Christians, and they began to raise me in the ways of God, knowing God personally.

And then I came. I went home to Hawaii after the year, and I just knew I have to come back, and I came back to Germany, and I remember we. I was part of a. I was playing the lead role in a pantomime musical that traveled through Germany, and we were in tubing in, and at that time there were a lot of active Communist students who were very, very opposed to what we were what the pantomime was about. It was about Jesus.

I was scared to death to get out there, and I remember being backstage, and we were praying together, just giving ourselves to the Lord, and I remember the Lord prompting me and saying to me, would you be willing to never go back to Hawaii.  I was there on my knees, and I began to weep, and I said, Okay if that’s what it takes, and that’s what you want. I am willing. And so there, on my knees and tubing in, I laid down Hawaii, and I said, I am willing, and I did end up going back to Hawaii but then ended up coming back to Germany to serve for fifteen years. As far as I was concerned, I would spend my whole life here, because for some reason God called me to serve here, and I honestly, I know this sounds crazy. I really don’t care about Hawaii.

I could live here for the rest of my life, and just serve God and serve people and be totally okay. I want to tell you one last story because this was all prompted by this movement that was inspired by St. Francis. So during our times of ministry, and some of you might know this story, we moved up to Hamburg, and during that time my wife was sharing her testimony. We’re the kind of people who used to go out on the street and preach the kind you avoid, and we were preaching by McDonald’s, and there was this man who stopped, and he had tattoos all across his face, earrings all through his ears and tattoos like brains on his head and all over his body, and he had a German shepherd on the leash, and he listened.

And then he left. And later that day some of our team members ran into him. Long story short, he ended up giving his life to the Lord and moving in with us shortly before that I felt like the Lord was stirring me and saying, why do you wear this pair of pants? I said, because I like to look nice. Why do you wear that shirt? Because I like to look nice? And then I felt like the Lord say a repeat of what happened in Hawaii years before. Give it away. So I gave away all my nice clothes, and then, after the sky, Rocky gave his life to the Lord and moved in with us. I felt like the Lord nudging me and saying, would you be willing to identify with Rocky?

And I was like what he said. Would you be willing to identify with Rocky. So I took a deep breath, and I thought, Okay. And I went to get my haircut, and I came home with my whole head, and that time I had a full head of hair. My head was shaved, and I had a purple Mohawk. I came home, and I threw myself on the ground, and I started crying. I said, that’s crazy. This is crazy. It’s kind of too late for that.

So Then Rocky, his name was Gerrah, took me out and came home with army pants that were kind of ripped at the knees and an old leather jacket, and got my ear pierce just one, and that’s how I dressed for the next months didn’t wash my clothes.

My wife really struggled with it because my hair was like this, and I didn’t want to take it down at night, because it took so much work to get it to stand up. But if I would turn in bed, it might scratch her.

She was really frustrated, and really like rebelling against this whole thing that didn’t make sense to her. And one day in prayer, the Lord said to her without telling me, If you want to understand what I’m doing in Steve’s life, you willing to identify with him. So she went out and came home looking exactly like me. That was hard. So we spent. There’s a lot more to the story as you can imagine, the point being that when God begins to stir us and nudge us, how willing are we to take a step, even if it kind of doesn’t make sense, even if your parents are going to get upset with you.

What can we glean from the life of St. Francis of Assisi as we commemorate his life today?

Most high, omnipotent good Lord, grant your people grace to renounce gladly the vanities of this world; that, following the way of blessed Francis, we may for love of you delight in your whole creation with perfectness of joy; through Jesus Christ our Lord, who lives and reigns with you and the Holy Spirit, one God, forever and ever. Amen.