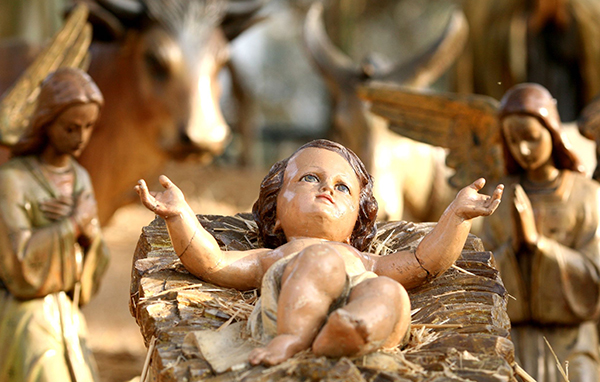 I love all of the traditions of the Christmas season – German Christmas markets, Glühwein, Christmas cookies, Christmas Carols like Chestnuts Roasting on an Open Fire (although in Hawaii we had no idea what chestnuts were!) , Christmas trees and decorations. For us as a family, eating Raclette meant Christmas. In Hawaii where I come from, we had other traditions like ornaments of Santa, shirtless on a surfboard, BBQ at the beach for Christmas dinner. I am sure each one of you has your favorite traditions that make this time of year cozy-gemütlich.

Here’s the simple answer: Nothing, or close to nothing.

Every year, I wrestle to grasp the true essence of Christmas as I wade through the expectations our commercial society, and we ourselves have forced upon us. For generations, Christmas has been shaped to be something that is so foreign to that historic moment in time when Baby God slipped into the mundane and not so mundane mess of our world and our lives, and became the fulfillment of the prophecy: Immanuel, God with us.

John describes Jesus’ entry into the world as such:

John 1:14 And zthe Word abecame flesh and bdwelt among us, cand we have seen his glory, glory as of the only Son4 from the Father, full of dgrace and etruth.

This is one of my favorite Christmas passages from John. He tries to put into words how the eternal God came into our world and became flesh. He does not say that the Word took on the form of humanity, but rather the way John uses flesh means that Jesus came into the full flow of human affairs. And then it says that Jesus dwelt among us. In Greek, dwelt means to pitch a tent. God did not come and dwell in a gilded palace and fortress but rather in all simplicity, like the simplest of people, he dwelt in a place that was mobile and intimate. If you have ever camped with others in the same tent, you know how intimate it is.

Two things caught my attention last week. The first was when actress Dame Kristin Scott Thomas stepped forward at a carol service in Westminster Abbey in honor of the late Queen to read a poem that the congregation was told was personally suggested by King Charles titled “Refugee” written by the priest-poet the Revd. Dr. Malcolm Guite.

“We think of him as safe beneath the steeple,

Or cozy in a crib beside the font,

But he is with a million displaced people

On the long road of weariness and want.

For even as we sing our final carol

His family is up and on that road,

Fleeing the wrath of someone else’s quarrel,

Glancing behind and shouldering their load.

Whilst Herod rages still from his dark tower

The lambs are slaughtered by the men of power,

And death squads spread their curse across the world.

But every Herod dies, and comes alone

To stand before the Lamb upon the throne.”

The second was a piece of art, a piercing nativity scene by Ukrainian-born artist, Irenaeus Yurchuk, depicting the Holy Family sitting in the rubble of bombardment. This riveting poem along with this stunning art piece capture the essence of Christmas for me. It is not the glitter and coziness we have concocted, but rather the reality of God stepping into our real worlds, and especially the worlds of those many who are suffering and struggling, even in our own midst.

A friend and seminarian of mine, Fr. Will Berry, wrote: “Many Christians including myself, believe in a God who is more like Zeus than Jesus. In a world that loves power, control, coercion, and violence, we expect God to operate precisely in those ways; because they line up with our own. We use words like Mighty and Warrior to describe God’s nature, but the truth is that Jesus reveals a God to us who is neither of those things. Ultimately, Jesus reveals a God to us who is self-sacrificial and vulnerable. He reveals a God who is unrestrained and unrelenting in his love for creation; a God who will stop at nothing in order to be with us… And this God is not a God who shies away from pain and suffering, but instead is One who willingly enters into the wounds of the world in order to draw us closer to himself.”

I found God in two places over the last weeks: One was at the Blue Christmas Service where people who were hurting came together to sit in God’s gentle presence and be honest about their pain. Then on Friday night at the rectory Christmas party, I marveled at the fact that we were a group of people who have come through and are still walking through major trauma in our lives- refugees from third countries fleeing Ukraine, a deportee, a person going through a really difficult divorce, and then there was me – twice widowed and coming to grips with a murder in my family.  God was with us and the sweetness of God’s presence in the midst of our pain was palpable.

May I take off my presider’s hat for just a brief moment, and share with you as Steve?

This Christmas has been really hard for Alexis and me. As I was pondering the scripture from John about God dwelling in a tent, I had a revelation about Vinny’s entry into our lives. Vinny was all set in his life. He had a vacation home in Florida and a home in NJ. He owned his dream car and was pretty much set for retirement. But he loved me so much that he sold everything he had to come camp out with us. He told me he would go anywhere God called me (as long as there was indoor plumbing and hot water.) You might know that Vinny was vulnerable from the beginning of our marriage – a stage 4 cancer patient. But he was not going to sit in his orderly life in the USA but instead chose to live a life of sacrificial loving. He was our rock, our constant presence. He was my mentor as priest and I would not be the priest I am today without him. He shaped me. You should’ve heard our discussions and sometimes arguments because this free church, Evangelical charismatic had so little understanding of liturgy.

His last act of loving sacrifice was the trip to Hawaii after Michelle died. He probably needed to stay safely at home, but he insisted on coming with me to face one of the most difficult moments in my life. I am so fiercely independent, but he know I needed him by my side. And once we had attended to all we could attend to with Michelle’s death, it was his time to move on.

Alexis and I miss him intensely. He was kind of like God in our lives in the sense that he was always there, steady, the mind of reason when I came up with crazy ideas. We talk about him incessantly. He was the liturgy cop and wouldn’t let us decorate for Christmas until it was Christmas, which meant after Advent was totally over. We have memories that we cherish. The creche here was Vinny’s and is one of our memories.

This sermon has two sides to it. The one side is you. Let Jesus be Immanuel and let him come gently into the deepest recesses of your life. Especially if you are struggling and your life is threatening to fall apart, invite Immanuel to come into all that is troubling you. Immanuel, God with us, Immanuel, Jesus who is God from the beginning and is the reflection of all that God is. Immanuel who loves you beyond measure and cares deeply about you.

The other side has to do with the world. Perhaps moving forward, we could consider rethinking the way we celebrate Christmas. Instead of focusing so much on the niceties we are used to, and spending tons of money on material things, perhaps we can focus on creating safe spaces where those we are hurting and vulnerable encounter Christ in our midst, spending our time and our money on alleviating the pain of others, being a channel of God’s presence in a way that transforms lives.

Let Jesus be Immanuel in your life, right where you are at, in the midst of whatever it is you are facing. Let him camp out in your life in a way that puts you in intimate, eye to eye, heart to heart contact with him.  If you are having a good year and not struggling, enjoy it but don’t keep it for yourself. Be Immanuel to those around you.

Let Jesus be the Prince of Peace, Wonderful Counselor, the one who loves us intimately and calls us Beloved.