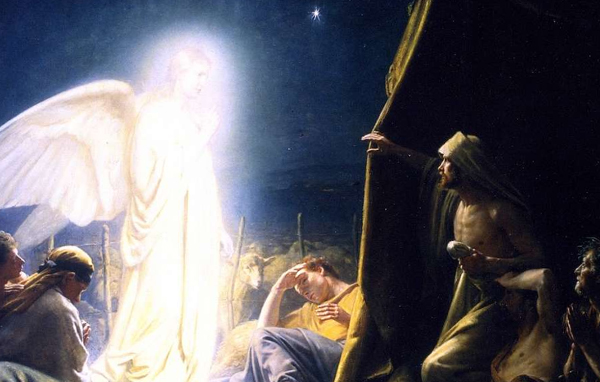 Good morning and Happy New Year! After such a difficult 2022, it seems so trite to say Happy New Year, but we say it, because that’s what we do. Today is the beginning of a new calendar year with all its hopes and aspirations. For some it is the time to make resolutions and set new goals. (For me, the changeover from 2022 to 2023 had an ominous feeling to it, a feeling mixed with apprehension and even fear. We were only ¼ into 2022 when my life was shattered and changed forever. But it was not just my life, the horrible aggression in Ukraine started by President Putin shattered and continued to change many lives including our own.)

Our liturgical calendar does not make even the faintest mention of the new year. Why? Because we march to the beat of another drummer. Our year started with the beginning of Advent, a time of preparation to celebrate the earthly birth of Christ and to witness the glorious final coming of Christ. There is something very comforting about this and in particular at the end of 2022, I found great comfort in focusing on the real deal, focusing on that which really matters in my life as a follower of Christ.

We read several times in the Gospel of Luke that Mary treasured and pondered. This speaks to me a lot and gives me a tool for approaching the new year. What are the precious things that God seems to be saying and doing in and around me that I can treasure and ponder, keep in the safe place of my heart until the time is right? It also means taking the time to listen and observe and not let life just run on by me.

I have always been a son. I grew up in a stable family with parents who loved and cared for me. And up until today my relationship to my Dad is solid and I am absolutely confident of his love for me. As a father, I know what adoption is, both in the legal sense and in the spiritual sense. I have been a father to many, many people throughout my life and I have seen it as part of my calling to mirror the fatherhood of God to those God sends into my life.

I have two children in my life at the moment who are adopted by me. I adopted Alexis at birth (and I know I have shared this story before.) When it became clear that my daughter was not able to raise Alexis and that I should step in, both an emotional and a legal process began. Alexis was born addicted to opioids and needed to remain the Neonatal Intensive Care Unit for a month while she was undergoing detoxification. During this time, I knew how important it would be for me to bond with her. From all that I had heard and read, the best way to do that would be through kangaroo care. For hours each day, I would sit in the rocking chair in her room and put her under my shirt, directly on my skin, hairy chest and all, and I would talk and sing to her, hold her. The most precious moments were when she would begin to look up into my eyes and when she would curl her tiny finger around mine. For those of you who know my relationship with Alexis, we are very, very close. This did not come from the legalities of adoption but from the heart to heart, skin to skin adoption that happened during that first month.

As soon as we were able to return to Hawaii, we went to court, and I became her legal parent and she became a legal heir. Immediately, I took on all the rights of a birth parent, and she received all the rights of a birth child. There is absolutely no difference from a legal standpoint. My name is listed on her birth certificate as her sole parent and this document carries legal power and cannot be disputed.

Alexis calls me Papa just like all my other kids and grandkids grew up calling me. And she knows that she has access to my heart.

In just a few days, I will proudly introduce you to David, my son from Uganda. As soon as his visa has been issued, he will board a flight for Frankfurt and will spent at least a month with us. David’s parents were killed in a motorcycle accident when he was just 6 years old, and he ended up on the streets of Kampala fending for himself. One day, Joseph Lubega, founder of Bulamu Children’s Center was walking through the neighborhood where David was “living” and their eyes met. Joseph asked David if he wanted to go home with him and the rest is history.

I opened my heart to David in 2016 while I was in seminary. He found me on Facebook and asked point blank if I would be his father. My response: “I already have 6 kids, what is one more? But I don’t even know you.” That began a process of getting to know each other. As a part of my studies I spent a month living with him in the orphanage where he grew up. I let David know that it was not legally possible (according to Ugandan law which had changed) for me to adopt him but I told him that I would “hanai” him – a common Hawaiian concept of adoption by which a child is taken into another family, often relatives, and is raised as their own without the legal formalities. And this is what we have been doing. Alexis considers David to be her brother. And David calls me Papa and one of his main stated goals in life is to make me and his McPeek family proud. He does not legally carry the name McPeek, but he uses the name on his social media profiles because he knows that he “belongs to us,” he is one of us and that is anchored in my will.

On this Feast Day of the Holy Name of Jesus, the day on which we commemorate his name that was announced before his birth in a dream, let us be mindful of the name that we carry that marks us as baptized of the Lord. We carry the holy and precious name of JESUS on us. Let us carry that name proudly and do Jesus proud by the way we carry his name. The way we make him proud is by reflecting who he is through the way we live and love.

What matters in 2023, regardless of what comes our way?

These are the things that I will treasure and ponder in my heart.